Being Trans in Argentina: the Challenge of Surviving Past 35

Luvia and Tatyana, two young trans women living in Argentina, talk about their dreams, fears and life goals in a country where, according to a recent report, a trans person is murdered every 96 hours. 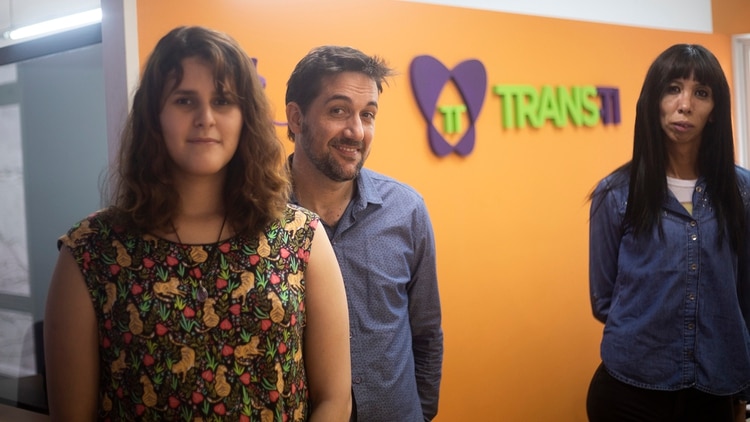 There is a house in the city of Barinas, Western Venezuela, nearer to the border with Colombia than to Caracas. In one of its bedrooms, a child in pajamas is about to go to bed. After tooth brushing, the kid lies down, turns off the light, presses both hands together and cries. It is the same every night, the wish never comes true. “I begged God,” says Luvia.

—What did you beg for?

—I begged him to make me a girl before dawn.

Now at the office where she works in Buenos Aires, Luvia recalls her childhood. The first person she came out to was her mom, who also resorted to God: “Her first reaction was to hold me while praying to God to stop this and make me a man, a man, a man. My parents didn’t kick me out, but didn’t accept me as a trans woman either. For them, it was inacceptable, morally wrong. And they thought it was something they could revert: the following week they took me to a psychologist to ‘cure’ me. But fortunately, the therapist was learned on the matter and said to my mom: ‘you can’t cure this because there’s nothing to cure’.”

Contrary to 90% of trans women in Argentina, Luvia never worked as a prostitute. Her deskmate, Tatyana, did. She did sex work since the age of 16 until last year, when she prepared her resumé for the first time in her life. “This is my first job ever,” she says as she waves her finger at the office supplies –a keyboard, a monitor, a desk. “Having a regular income and health insurance is a dream come true!” 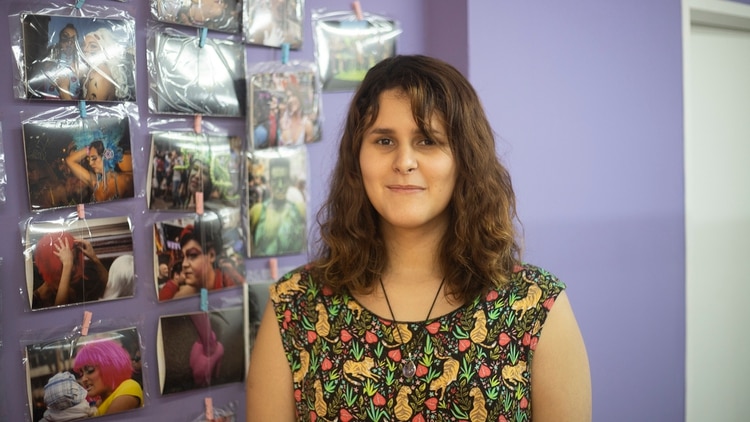 Contrary to 90% of trans women, Luvia never had to resort to sex work. She has recently migrated to Argentina from Venezuela.

Daniel Coletti has had an IT support company for 20 years. “But there comes a moment when you just don’t find any motivation in working only to make money. You start to think ‘what am I living for? Only to make money or to help someone have a better life?’,” he wonders. Together with his partner, Vanesa Perelló, they set up Trans-Ti, an enterprise that aims to offer jobs for trans people. Luvia and Tatyana are in charge of transcriptions, which can range from transcribing audio into text to putting a company’s turnover into a database software. They also serve as virtual assistants via WhatsApp –clients can ask them for tasks as varied as searching information or making an appointment with their doctor.

Buenos Aires was the first province in Argentina to introduce an employment quota for trans people. Popularized as Diana Sacayán’s Law, in homage to a trans activist that was killed in 2015, the law compels the provincial administration “to fill no less than 1% of its staff with trans people that are proven to be suitable for the job”. Other three provinces –Chubut, Río Negro and Chaco– have also passed similar laws but these are not in full effect yet, and LGBT organizations believe they won’t ever be. A law that is not actually enforced sounds good when you announce it on the press but has no real impact on the people it claims to protect. 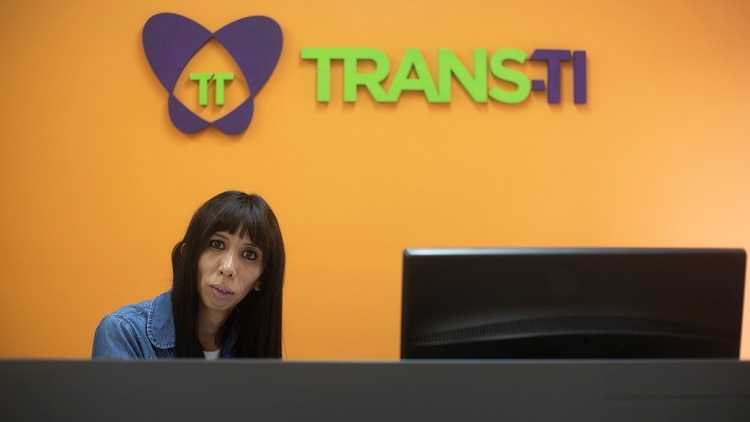 Tatyana was born in Tucumán and had to drop out of school when she was 14.

Florencia Guimaraes, member of trans organization Furia Trava, says this problem stems from a political decision: “In the case of Buenos Aires province, it’s governor María Eugenia Vidal who has the power to put the law into effect. We’ve had a lot of meetings at the provincial Ministry of Human Rights, but nothing came out of them. The same happened in La Matanza, where I live. We submitted letters to the local council and the mayor. We made protests in front of the council. We gathered 2500 signatures supporting the implementation of the law. But we received no answer whatsoever. And it all goes back to the same point: a law that was supposed to revert all the violence the State had exerted on the trans community is now being violated.”

Luisa Paz, coordinator at trans organization ATTTA, points that the main flaw of said law is embodied in its use of one word: “suitable”. ”That’s a loophole. In Argentina, we’re immersed within a conservative religious culture. Who is going to decide if we’re suitable or not? With what criteria? Besides, everyone knows that in the public administration most posts are not assigned by virtue of suitability but of cronyism. There’re people who are illiterate or who learn the know-how after they’re hired. So why are they so strict with the trans quota and not with the rest of the personnel?

According to the last report on the situation of trans people in Argentina made in 2014 by ATTTA and Fundación Huésped, 6 out of 10 trans women and 7 out of 10 trans men over 18 years old have dropped out of high school. 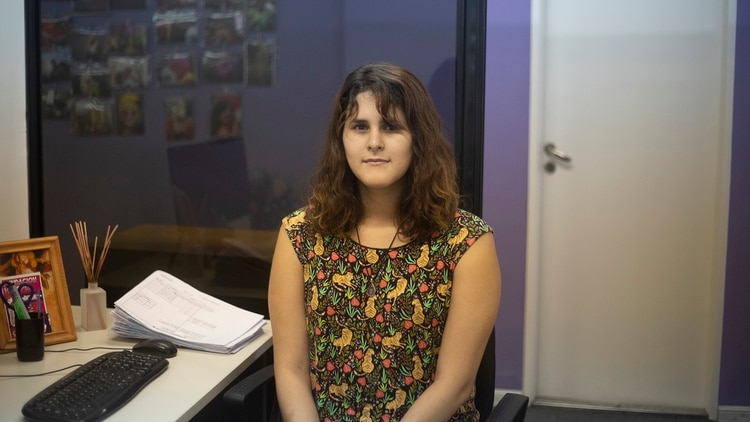 In the province of Tucumán, where she was born, Tatyana quit school in grade 9. “It was during my transition. When I showed up at school dressed as a girl they wouldn’t let me in. They wanted me to be dressed as the gender I’d been assigned at birth. Back then, there was no Gender Identity Law nor any recognition of self-perception, let alone being addressed by your chosen name,” she says.

Until last year, Tatyana worked at the red-light district within the neighborhood of Palermo in Buenos Aires City.  She started at 7 PM and stayed there until roughly 5 AM, when she could finally go back home with her husband. Now she works at an office in the downtown from 8 AM to 1 PM. Afterwards she heads to Chacarita neighborhood, where she stays until 6 PM at Mocha Celis, an educational institution for trans people. She’ll be receiving her high school diploma in a year and a half.

—Did you get used to the new work shift?

—Before I would never see the sunrise. I didn’t know what living in the morning hours was like. I like that. The only thing that’s a bit of a drawback is taking public transport.

—What do you do in those situations?

—Sometimes I just let it pass, but the truth is I do notice the giggles, the nudges, or the stares. With time that will stop happening. Maybe not for older trans women but it will for the younger generations, for trans children. Going through these experiences hurts you because you feel like you won’t ever be accepted in society.

According to the last report on the situation of trans people in Argentina made in 2014 by ATTTA and Fundación Huésped, 6 out of 10 trans women and 7 out of 10 trans men over 18 years old have dropped out of high school.

One of the reasons why Luvia decided to migrate to Argentina was the murder of two trans women in Venezuela. She had heard of the case while she was on her way to the Visual Arts Faculty in Merida (Northwest Venezuela): “That made me realize I had to leave. My country is the third in Latin America in terms of transfemicides. And we know that even without having official numbers, because the government won’t make them public”. The other reason was that she wanted to have an ID with the name she identifies with. “At university, professors said stuff about me. It was a context in which they wouldn’t let me use my name on the official lists or the report cards. So I was about to undergo a transition that wouldn’t be officially recognized”. She managed to get by for a while as a freelance illustrator. 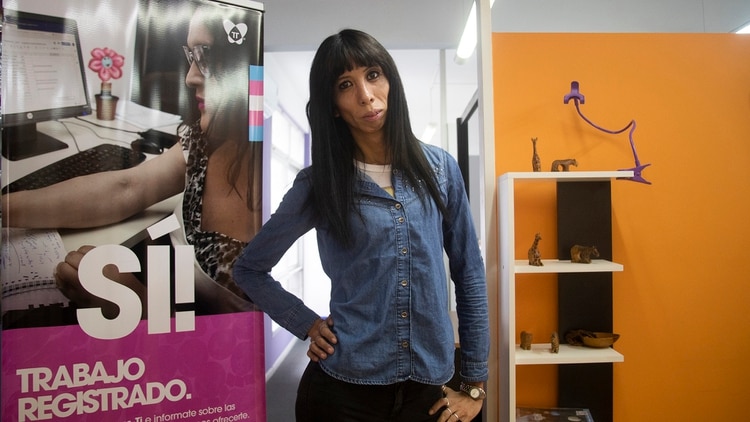 “Having your ID with your chosen name is great because you can actually be yourself everywhere, especially when you have to go to places where you get addressed by your name,” says Tatyana about the advantages of the Law on Gender Identity.

Luvia will have to wait two years to see her name on her ID. Tatyana already has hers. And she says: “Having your ID with your chosen name is great because you can actually be yourself everywhere, especially when you have to go to places where you get addressed by your name. It’s a horrible thing when they call you by your birth name. Before having my ID amended, I used to ask my husband to come with me to the doctor, so that when they called out my birth name, he would stand up first and I’d pretend to be accompanying him. Back then, there weren’t doctors or psychologists trained in trans issues such as hormone treatments or surgeries. You just self-administrated hormones, for example, by purchasing contraceptive pills.

—Did you stop going to the doctor?

—Yes, I just treated myself with what I could find. We all had that older friend that knew better, that told us “take this”. But we didn’t know about the risks of industrial silicone. I used that on my buttocks. So now I try to advise younger girls not to do so. Because with time you start suffering the consequences.

Only 1 out of 10 trans men and women have pension contributions. This is not only because of the lack of access to quality employment but also because of their life expectancy: 35 years. According to the last report issued by Argentina’s National Observatory of Hate Crimes against the LGBT Community, 59 trans people were murdered in 2018, which amounts to 1 death every 96 hours. On top of that, according to ATTTA and Fundación Huésped, 5 out of 10 trans individuals have had suicidal thoughts and 4 out of 10 have at least once attempted to take their lives. In the case of trans men, the first suicidal attempt usually occurs at age 13 while in trans women it’s at 16, “possibly because these are the ages when hormonal changes start to take place”. 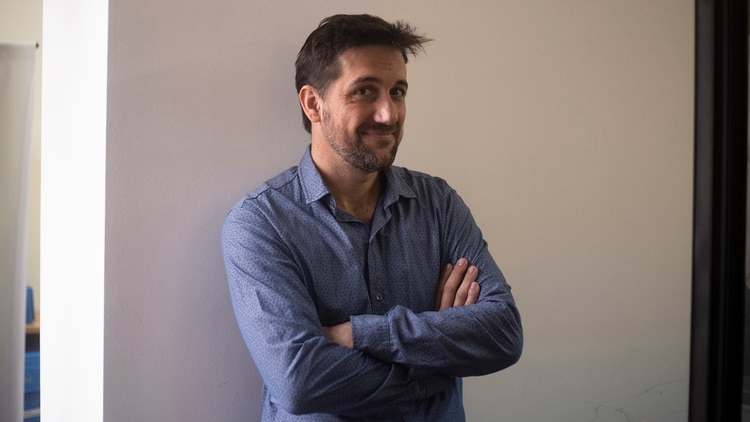 Together with his partner, Vanesa Perelló, Coletti launched Trans-Ti, a startup that offers jobs to trans people.

In September of 2015, late trans activist Lohana Berkins wrote in Página 12 about the trans quota law that had recently been approved: “It allows us to have other work opportunities besides sex work. It also challenges the medical discourse because, historically, we’ve paid for our rights with our bodies. The law has always tried to force us into binary categories, by subjecting us to medical and psychiatric examinations without telling us what they sought to prove. The Gender Identity Law meant a challenge to that. Because it’s allowed us to consider our demands as rights and not as benefits.”

¨It’s not only about work but about the rights granted by the Argentinian State to every citizen: education, household, work, healthcare and also what we call a long overdue reparation: a retirement payment for trans people over 55. The State ought to make up for so many years of abandonment,” says activist Luisa Paz.

—What would you like to be doing in a few years?

Luvia: My dream job would be within the publishing business. I love illustrating children material.

Tatyana: Once I get my high school diploma, I’d like to become a Biology teacher and work at trans school Mocha Celis. I’m 33 years old and I wish to live many more.